When the Dallas area was being settled by American pioneers, many of the settlers traveled by wagon trains along the Shawnee Trail. This trail became the Preston Trail, and later, Preston Road. With all of this activity, the community of Lebanon was founded along this trail, and was granted a U.S. post office in 1860. In 1902, a line of the St. Louis-San Francisco Railway was being built through the area, and periodic watering stops were needed along the route for the steam locomotives. The current settlement of Lebanon was on the Preston Ridge, and was too high in elevation, so the watering stop was placed about 4 miles (6 km) to the west on lower ground. A community grew around this train stop. Some residents of Lebanon actually moved their houses to the new community on logs. The new town was originally named Emerson, but the U.S. Postal Service rejected the name as being too similar to another town in Texas. In 1904, the town's residents chose "Frisco City" in honor of the St. Louis–San Francisco Railway. This name was later shortened to Frisco.

Later, in 1978, the first season of Dallas was filmed at Frisco's Cloyce Box Ranch (now the Brinkmann Ranch), where the house on site was used as the Ewing family home. This house burned down during renovations in 1987, and the steel skeleton of the house still stands on today's Brinkmann Ranch, now the largest family-owned estate in Frisco.

The Snow Cone Lady is a local establishment opened in 1983. Since its opening, owner Mary Mathis has been serving cold treats to locals every summer.

The distinctive Frisco coat of arms is based on the St. Louis-San Francisco Railway's logo. 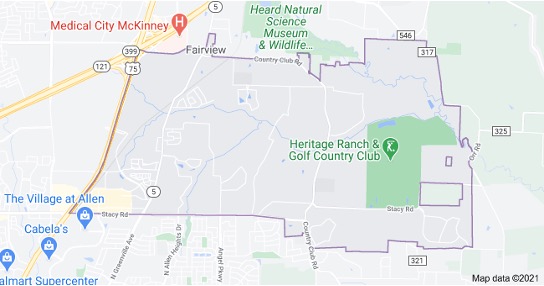